With the whirlwind of new festivals popping up all around the globe it is hard to keep track of which ones are actually worth the hype. Encompassing all the good qualities a festival needs: good music, creative decor and absolutely incredible fashion sense.

The Coachella Valley Music and Arts festival was started by Paul Tollet in 1999 and has been capturing my attention since the first time I heard about it. The three day event was created after the venue was used in 1993 for a Pearl Jam concert in front of 25 000 fans (Lamb, n.d.). Coachella is one of the largest music festivals in North America featuring different music genres, from rock, indie, hip hop and electronic music as well as art sculptures. Across the festival grounds there are several stages hosting live acts continuously. The festival has played host to acts like Kings of Leon, The Cure, The Foo Fighters, The Strokes, Jay-Z, M.I.A and many more. 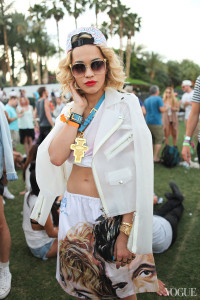 Over the years the festival earned a name for a fashion hotspot with festival goers, all ensuring they are dressed to the nines. This year there was no denying that street style was taken to another level with fashion elite like Alexa Chung, Diane Kruger, Katy Perry, Alessandra Ambrosio, Rita Ora and Kate Bosworth all mixing big fashion brands with their own unique styles. Creating looks that make them stand out of the crowd, not only for their celebrity status

“The original frontiers women were all about freedom: expressing peace and love with flowing dresses and tresses, liberating their bodies and minds, bearing their bellies and weaving daisy-chain jewellery” (Vogue, 2013). Bearing that statement in mind the fashion for Coachella has not changed a lot over the years, short floral dresses, crop tops and chunky jewellery have become the new source for expressing peace and love. Creative sunglasses have become the new trend with everyone expressing a more daring side of their personalities with a bold frame.

The festival happens every year in the beginning of April and is a definite number my bucket list. A crucial tip I can supply for this event is going with an open mind and planning all your outfits ahead of time. All the information needed for the festival can be found on www.Coachella.com. 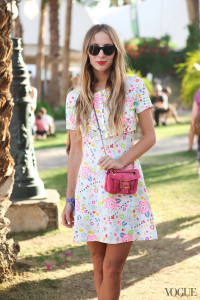 · Coachella in the rain (Logo)